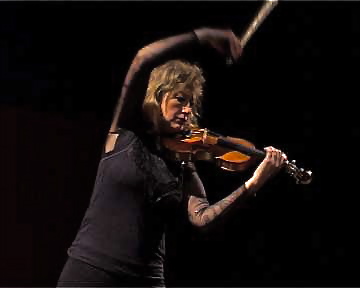 Resonance is a concert performance, composed by Alison Jones, made up of 7 musicians and 2 performers. Inspired by the legends of Celtic female warriors, from a time when honour and elemental forces were the powers that influenced lives, this provocative and visceral music is a hybrid of flamenco, classical and Arabic disciplines fused with traditional Scottish and contemporary music.

Alison started writing Resonance (formerly called WILDFIRE!) on tour with Spirit of the Dance in the States back in 1999. She found that audiences loved everything “Celtic’ thinking it was all about the Irish, and having been raised in Scotland, she found herself defiantly wanting to create a spectacular show that sang the song for Scotland, but was appealing to the masses. Performing to 2500-5000 people 8 or 10 times a week, she knew there was a market eager to hear this story. She started to research myths and legends from Scotland.

She had always loved Skye, and promoting strong women, so the choice was obvious! Celtic myths were generally passed on orally and so she visited Skye on her return from touring, and interviewed one or two elders who remembered the legend. She was directed to the alleged ruins of Scathach’s castle and that was that. The magic and mystery of the isle grabbed her and she knew she had to base a show inspired by this wonderful, visceral island, also known

as The Land of Shadows.

She researched further in The National Library of Scotland, Edinburgh and then decided to move to Granada to write the music. The choice seemed obvious as the Celts were renowned travellers and came through Southern Spain en route to the U.K. Some of the burial chambers are evidence of this, as are the similarities of Arabic tile designs and Celtic knots in La Alhambra. She stayed there for almost 3 years, and soaked up the musical influences of Flamenco and Arabic music. The music eventually started to flow into sounds and she wrote all the arrangements in midi, in her room in Granada, which she had turned into a studio. When it was time to record using the real instruments: Celtic flute, whistles, pipes, clarsach, violin, viola, cello, percussion, accordian, bazouki and guitar, she returned to The Scottish Borders, where her long -time friend from school days ran a recording studio. 6 weeks and 2 CDs later, the full music arrangements were recorded, using top Scottish and Irish musicians.- and a flamenco guitarist recorded live in her room in Granada! A mammoth task – but well worth the effort.

Will O’ the Wisp

You can find and download the music of Resonance on itunes